I’m not truly lazy. I would never garden if I were. I can buy organic produce at any number of nearby grocers and most have flowers too. But there’s something about growing them myself that I can’t shake.

But. After more than twenty years living in the flatlands of Berkeley, where I built garden beds and amended the soil with compost and manure and had sun for most of the day, I’m now living on a steep shady hillside in Mill Valley where deer nibble at everything, even allegedly deer-resistant plants like oleander. Oh, and we’re now officially in a drought.

The good news is that the winter days here have been sunny and gorgeous, with mid-afternoon temps in the high 60s and now and then hitting 70. Downright criminal for January, especially for a kid who grew up in Chicago. But I can wear shorts outside. In January.

The hillside is full of oak and bay trees and there’s a natural beauty to it that i want to keep, but I still have visions of terraced garden beds lush with vegetables and flowers. Here’s a shot of my backyard garden in Berkeley from a few summers ago. 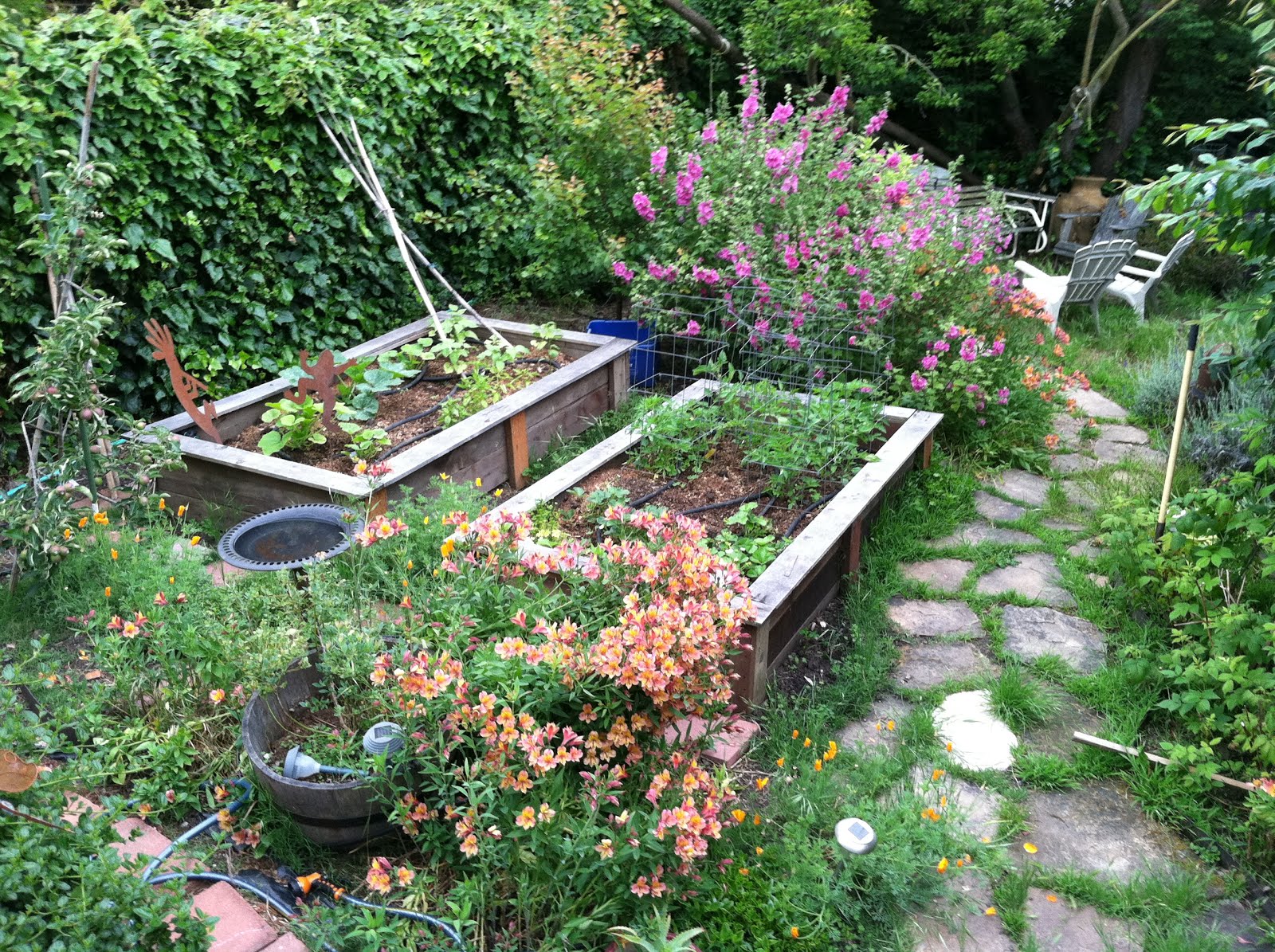 And here’s the hillside this morning. 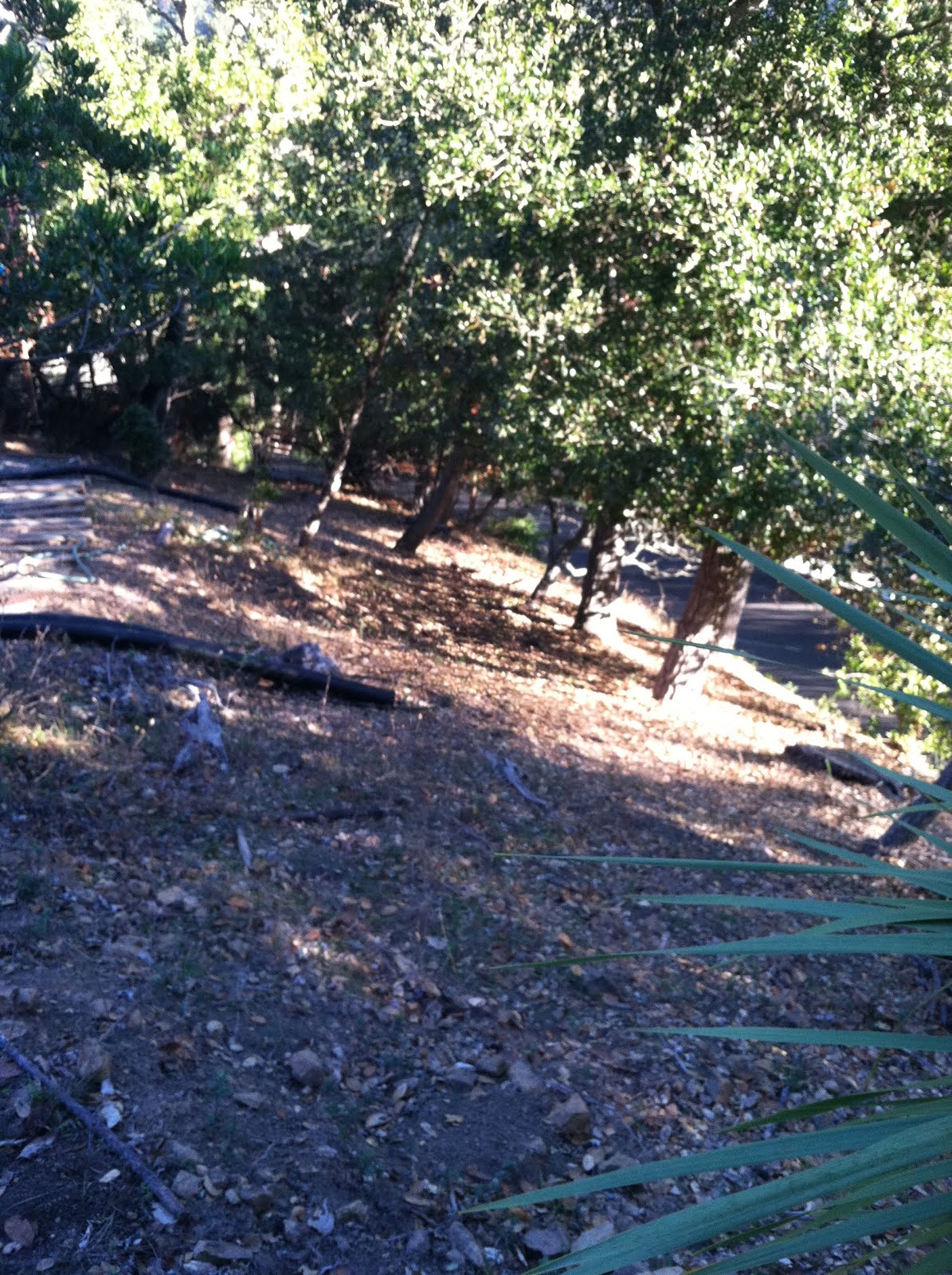 I know the overgrown Berkeley look is not appropriate for the hills of Marin, especially during a drought. But maybe I can create a little oasis among the oak and chaparral. A neighbor down the hill has just had his backyard landscaped, and that’s given me some ideas. See those curving rock walls and the steps up the hill. It’s much more ambitious than I can even consider right now, Doesn’t stop me from dreaming. 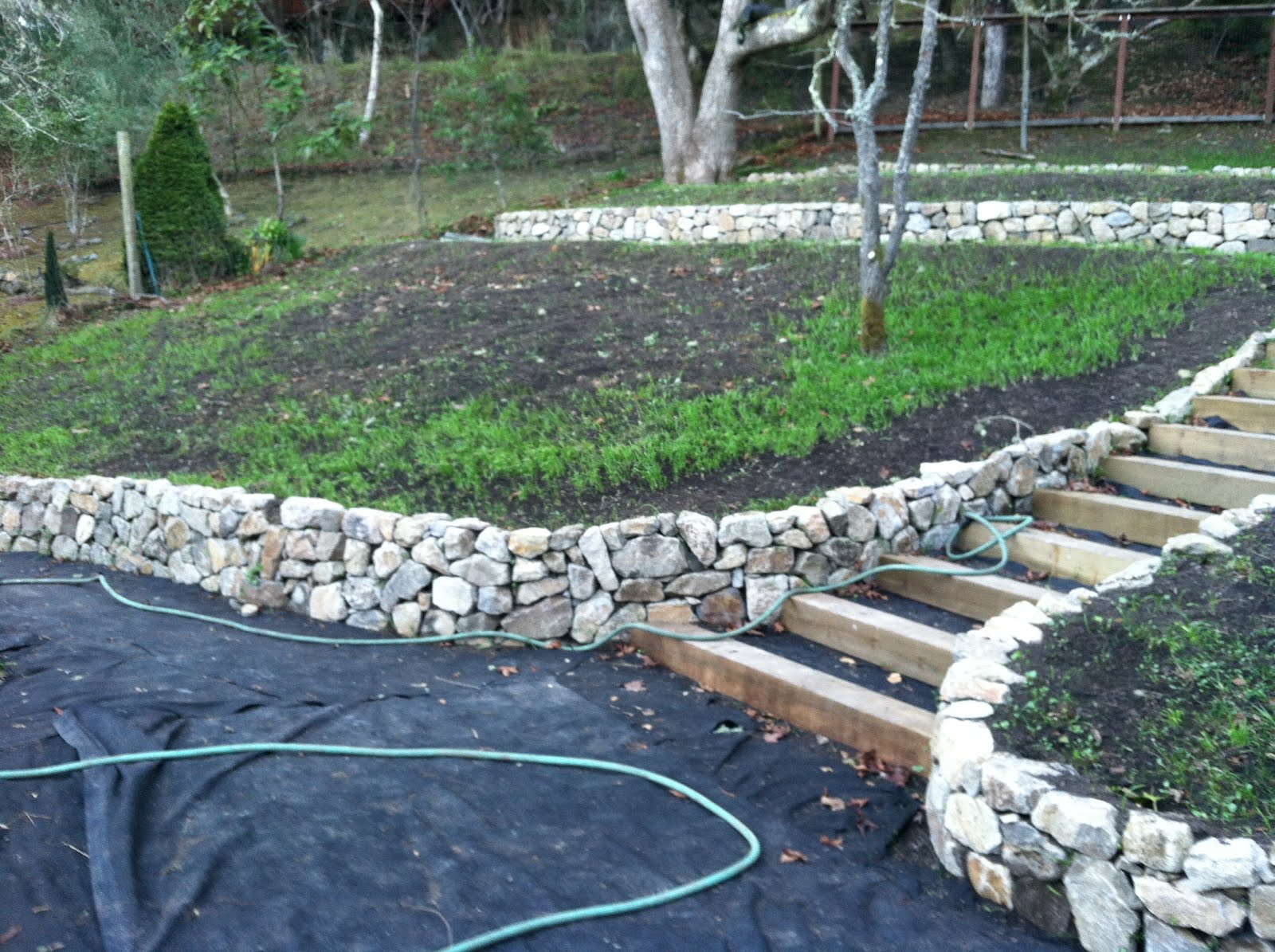 Actually I’ve been imagining rock walls ever since our visit two summers ago to the Inca Trail and Sacred Valley. Here’s one of the many Inca sites we visited, full of mortarless rock walls and irrigation channels that carried water down from the mountains. 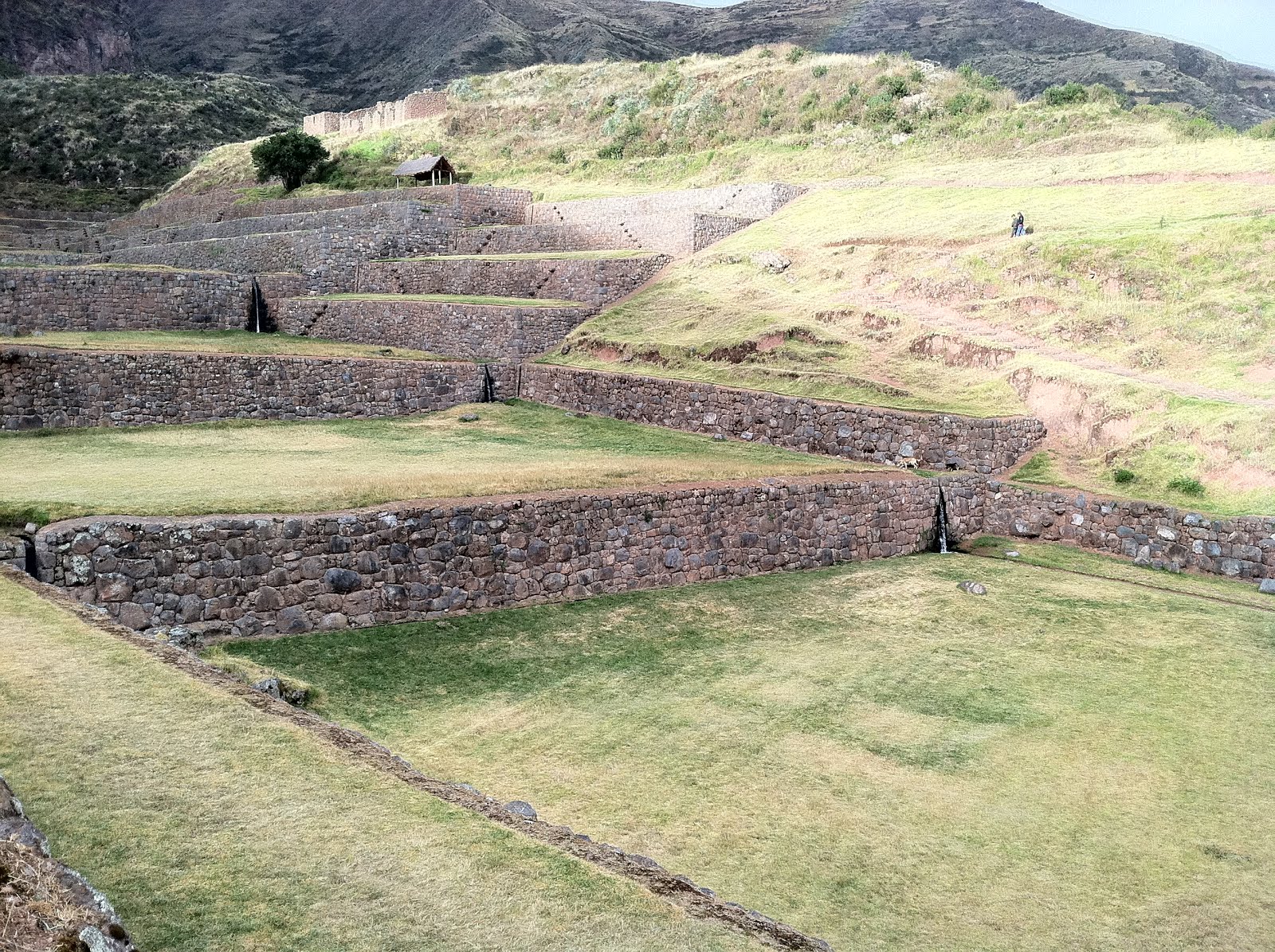 (FYI, I tried to identify that photo above, which I took, but didn’t identify. I gave up before I could, but I did find a portfolio of terraced farms, mostly from Vietnam and China. Also a few from Peru.

These visions will have to wait. (There’s lazy and there’s lazy.) I did start a garden this week, however. I started small. With a wheelbarrow, a planter box, and seeds.

I repurposed an old metal wheelbarrow, full of holes from rust, lined it with landscape cloth, filled it with potting soil and compost, and planted mesclun (summer salad mix) and arugula seeds. I know arugula grows easily from seeds. We’ll see about the lettuce mix. 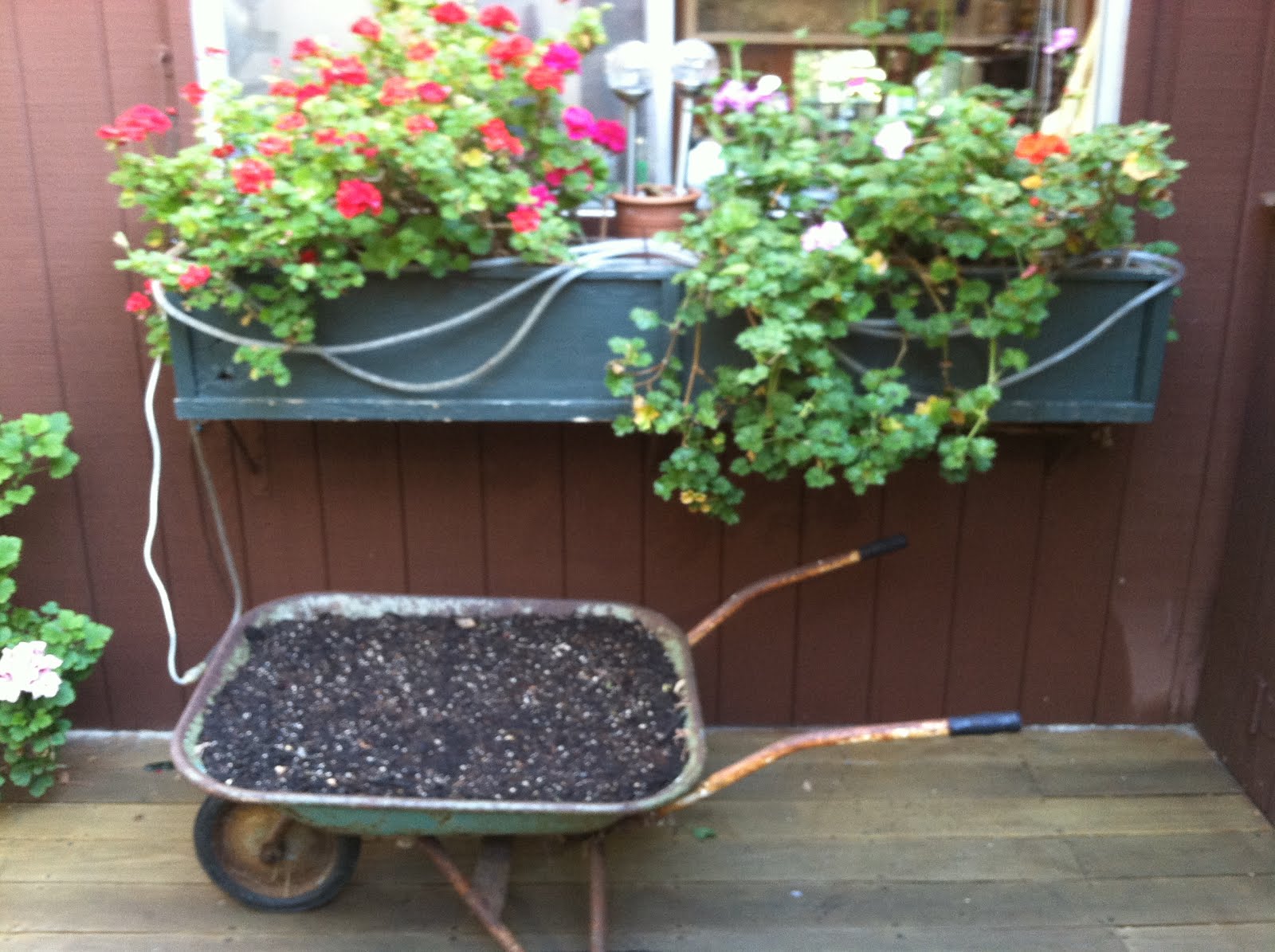 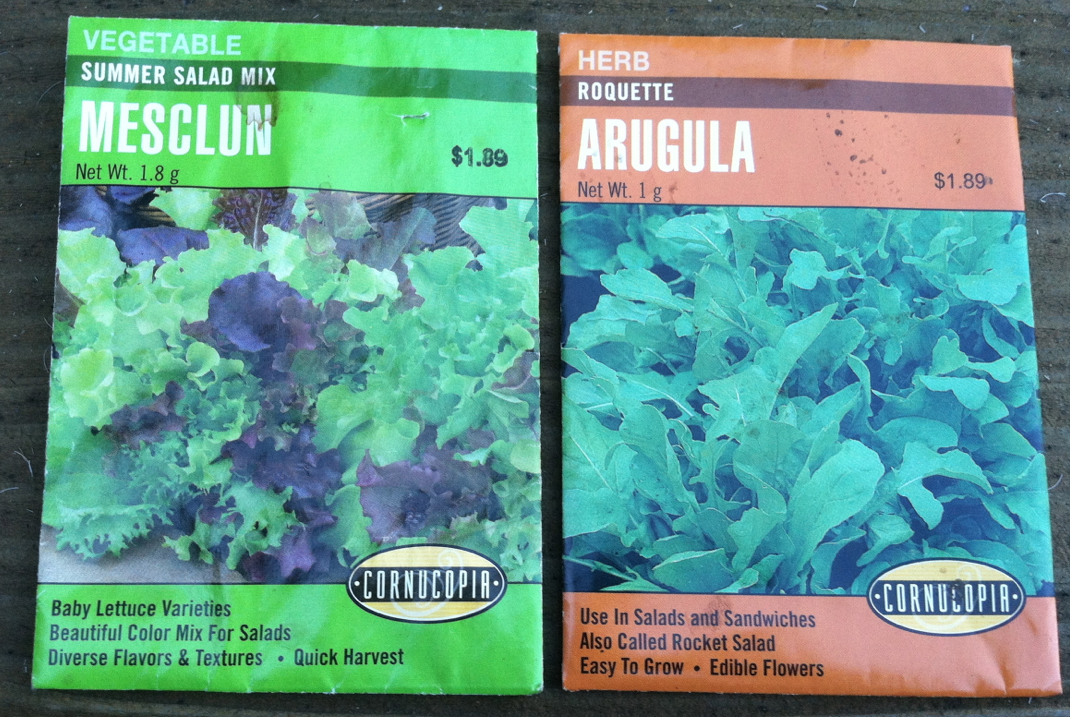 The wheelbarrow is sitting on the deck outside the kitchen window. Once the seeds sprout, I’ll need to protect those baby greens from deer, which have, on occasion, brazenly trotted onto the deck. (We’ve seen evidence of their eating habits too.)

The easiest way is to string a net across the five-foot wide entrance to the deck, but that means hooking and unhooking when we go in and out through the front door. Another option, which I’ve working on, but isn’t finished, is a lightweight hoop/cage that fits over the top of the wheelbarrow.  You can see what I have so far — it’s made from water sprouts pruned from my pluot tree in Berkeley, bent and held together with twine. It’s fallen apart once, but Iwith some patience, I can make it work. Once I get the “skeleton” stable, I’ll attach some a screen over the top and that should keep out the deer. 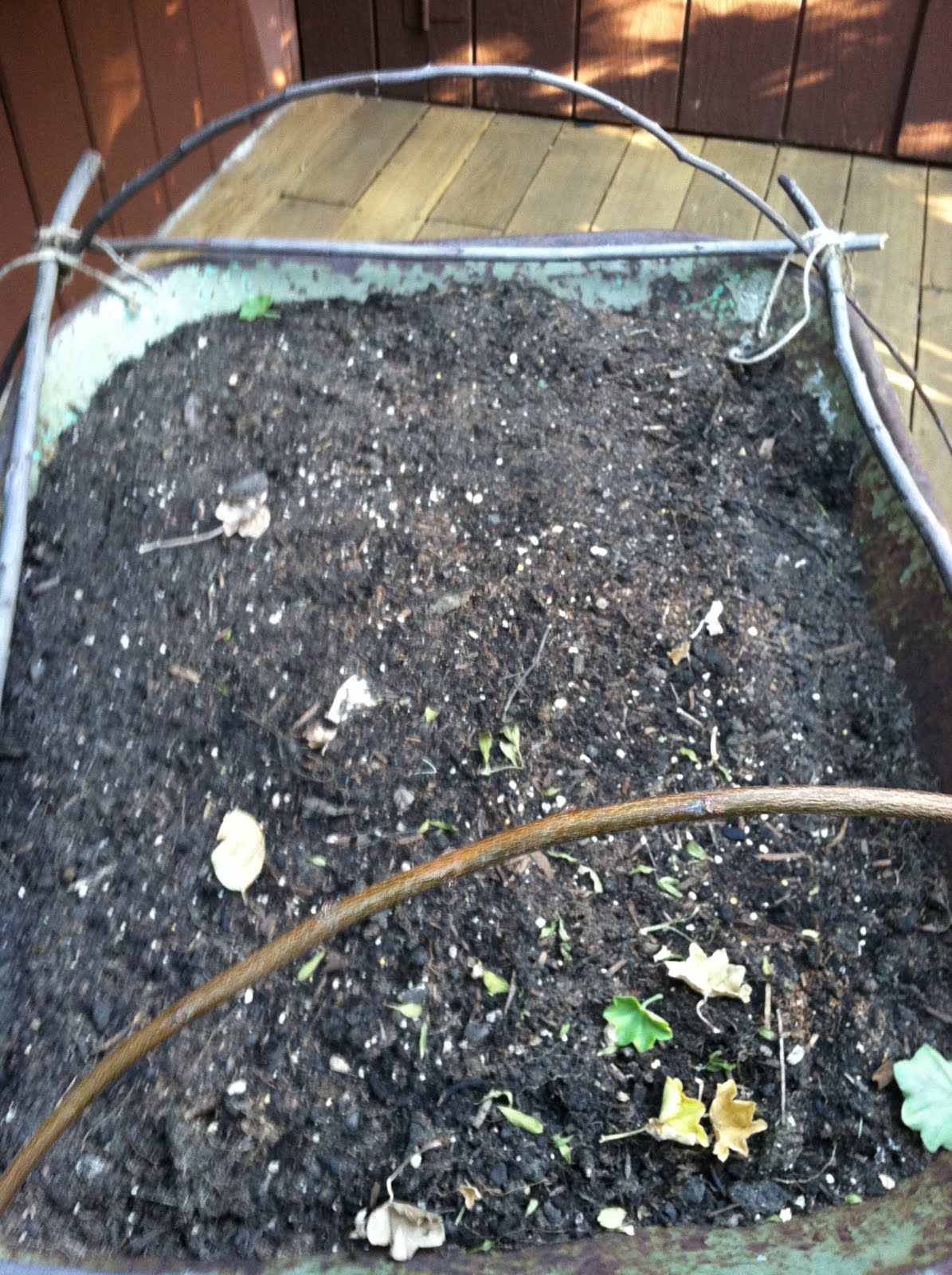 My other venture was even easier, though I had to pull out my drill. I screwed two metal brackets into the railing posts of the lower deck, high enough above the ground that even a deer on stilts can’t reach it, set an old redwood planter box on them, and planted about 15 ruby red chard seeds. Will thin later. I added a spoonful of 5-20-5 fertilizer I found under the house. 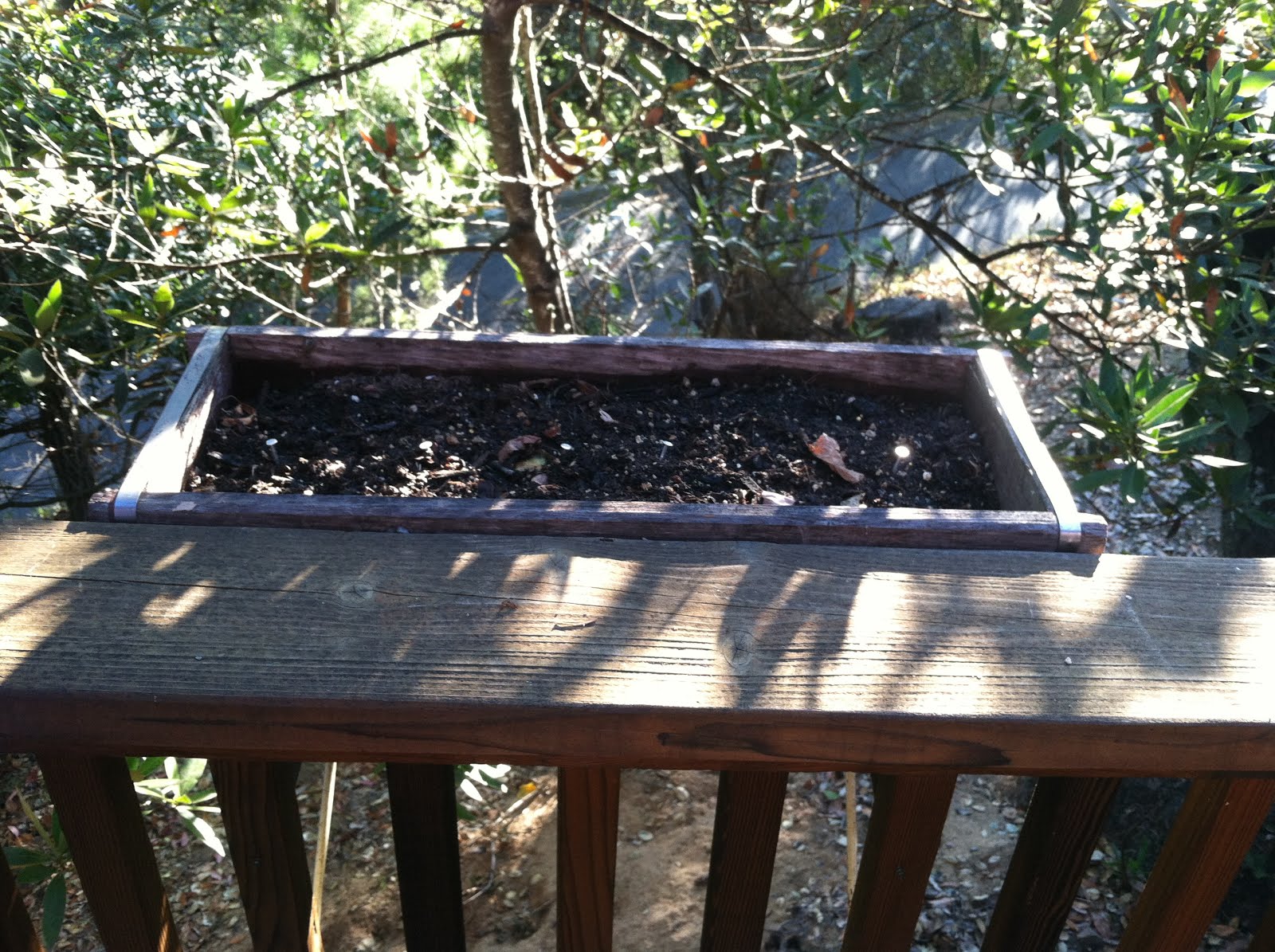 I have no drip irrigation set up here in Mill Valley so for now I will have to hand water, every day until the seeds germinate.

It’s a small step, but it’s a start. Brings to mind that Goethe quote: “Whatever you can do, or dream you can do, begin it. Boldness has genius, power, and magic in it. Begin it now.”

It may be a while before I built the rock terrace walls. But I think I’ll buy a new hose this weekend.

(John Byrne Barry is author of Bones in the Wash: Politics is Tough. Family is Tougher.)

Disclosure #1: There’s no gardening in this post, unless you count nature, which one could call divine gardening, if one were inclined. My intention is that this blog will be primarily about gardening, but it’s January and it feels like it’s never going to rain again in northern California, and it’s a challenge to write about gardening when I’m not doing any.

But gardening can serve as a metaphor for all sorts of things, so I think I’m covered until I get some seeds in the ground. Meanwhile, here’s a blast from the past that does include gardening — Two Top Ten Lists From the Lazy Organic Gardener.

I grew up in the Midwest and my parents were serious, albeit liberal Catholics, with maybe a bit more Calvinism in the mix than some. (I remember my Mom once saying, “You kids are having too much fun.” Now in her defense, usually one of us was crying five minutes later, so it’s not that she didn’t want us to enjoy ourselves. It’s just that pleasure was dangerous.)

Modesty was a big part of this package. How much of that came from being a Midwesterner, how much from being an Irish Catholic, and how much came from my parents is hard to sort out. But bragging was not something we did.

I’ve forgotten much more than I remember of the biblical stories and phrases we learned, but “the meek shall inherit the earth” — that stuck. It’s not that that sentiment was pounded into us as much as it was in the air and water. We were supposed to be patient, not pushy. Good things will come to those who wait.

Now for a child, those imperatives makes some sense. There’s plenty of evidence that children who can delay gratification tend to be more successful. And happier.

But the meek-shall-inherit-the-earth message is arguably about delaying gratification until you’re dead. Which is way too long.

Anyone who has actively worked to make the world a better place knows it’s not going to happen if you wait patiently. We didn’t get the Clean Air Act or the rights of women and blacks to vote or gay marriage by waiting patiently. Every advance had to be fought for. Has to be fought for.

But fighting for things. That can annoy people. Who wants to be a nag?

I bring this up because within the last month, I published Bones in the Wash — Politics is Tough, Family is Tougher, a novel set during the 2008 presidential election in New Mexico, and I left my job at the Sierra Club after 25 years.

Because I do want people to buy and read my book and I do need an income, now I have to become a shameless self-promoter. 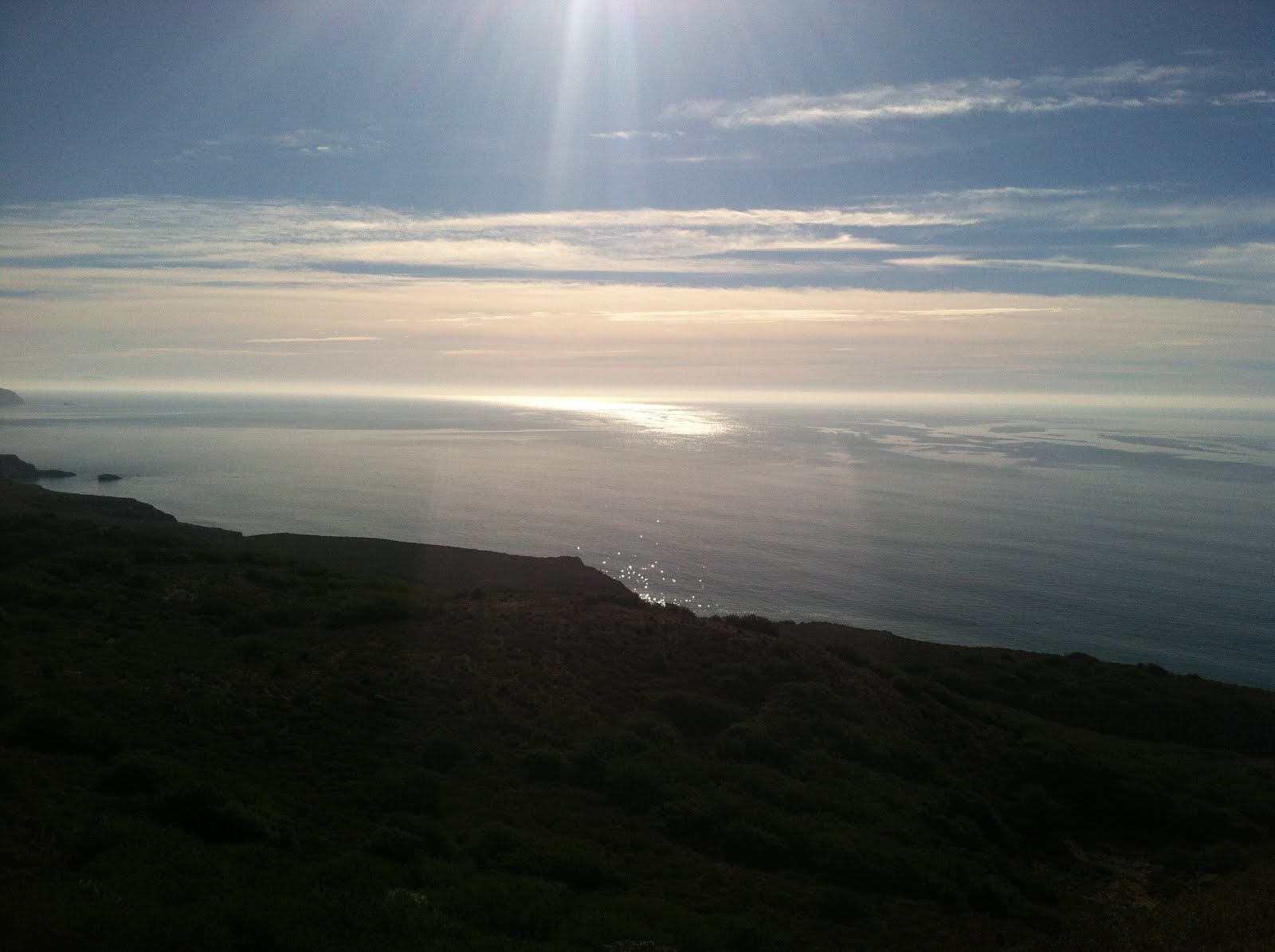 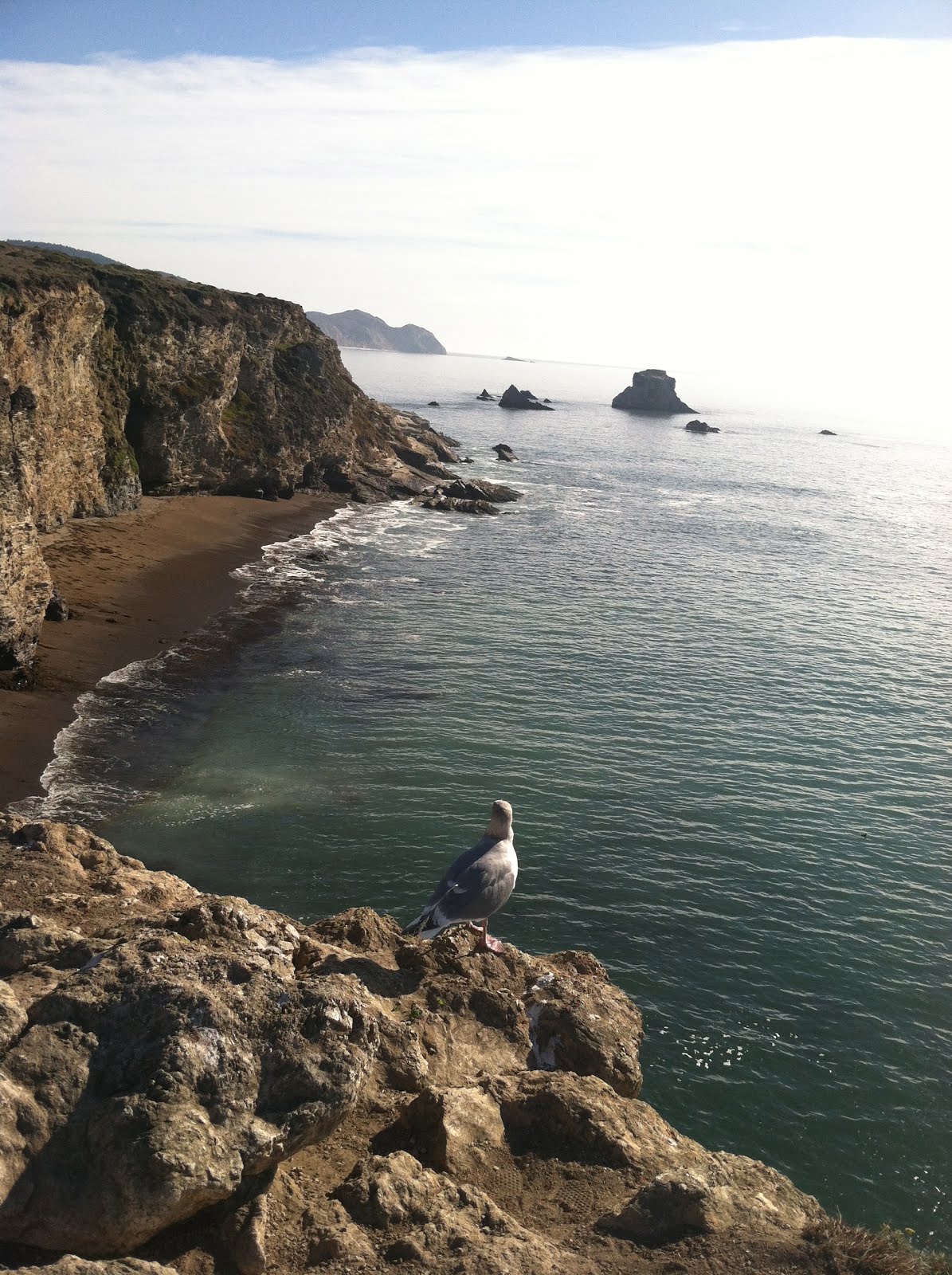 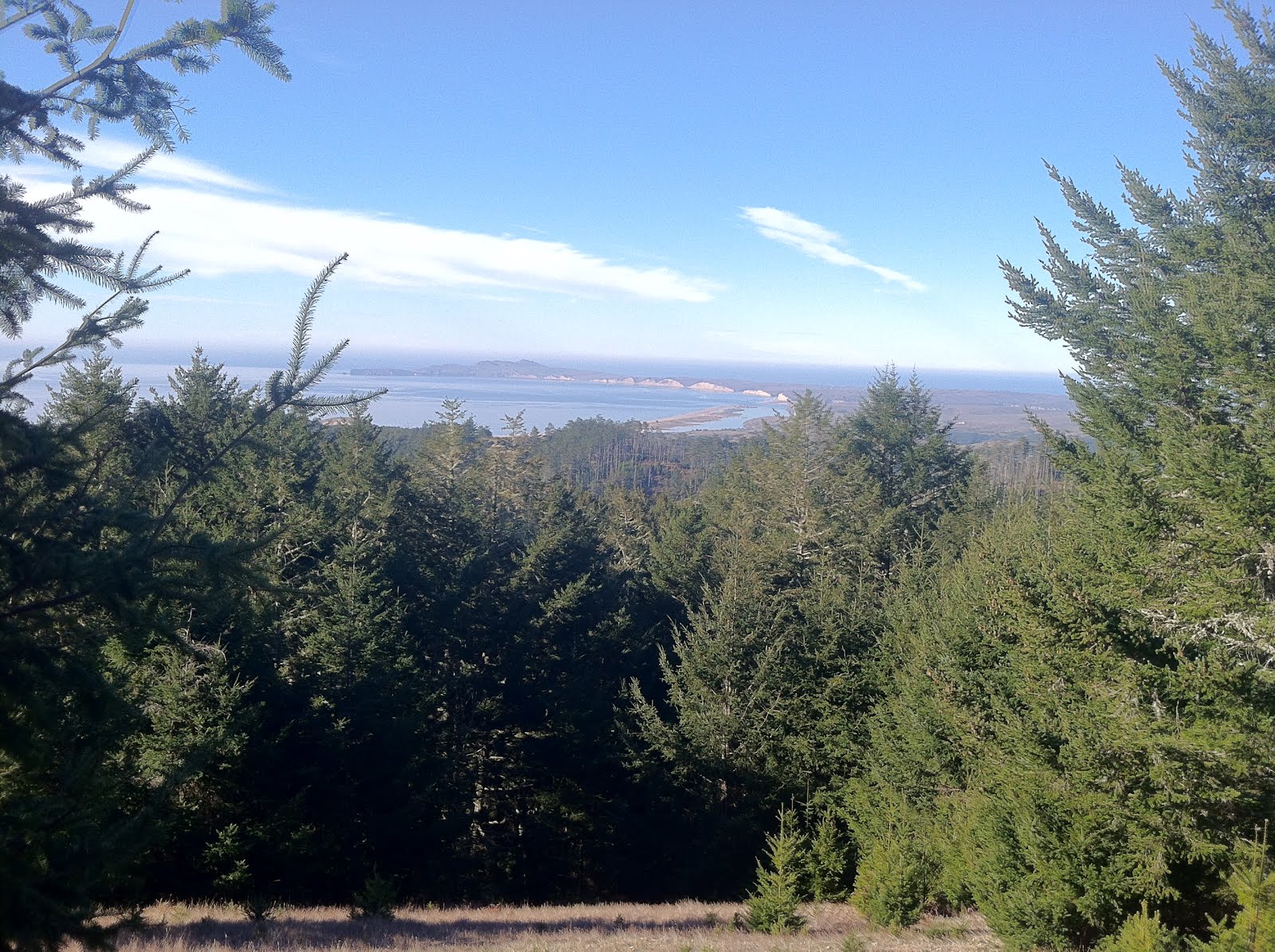 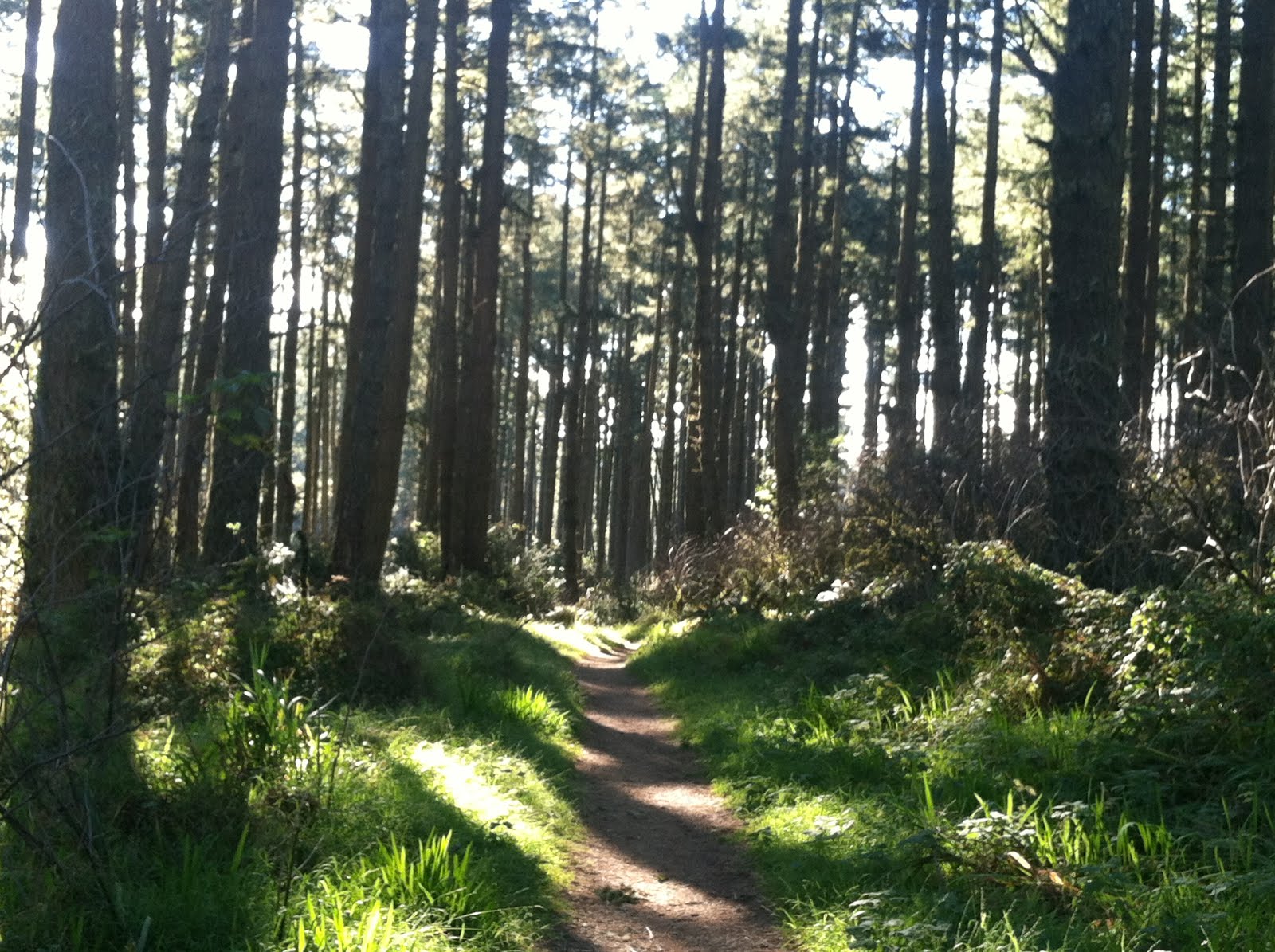 (In case you’re wondering what these photos have to do with modesty, well, I took a long hike in Point Reyes to mark the new year and get some inspiration from the natural world — that pretty much never fails — and composed this post as I walked.)

For many years, a major chunk of my job was to promote the activities and visions of others. I was a writer, editor, and designer, and I told stories about the people on the front lines, who were fighting for clean water or endangered turtles or wilderness.

It was a behind the scenes role, and in fact, about seven years ago, I received an award called the Behind the Scenes Award for my work. I remember I gave a little speech, and talked about happiness, sharing the work of psychologist Martin Seligman, who differentiates three kinds of happiness.

The first is pleasure. We enjoyed a good meal. Had an exciting day skiing. The second is absorption, where we are so focused on what we are doing that the rest of the world recedes. Seligman uses the example of an geologist who studies crystals and starts the day looking into his microscope at a crystal and then is startled because he thinks someone has come into his lab and blocked the light when in fact the sun has gone down.

The third kind of happiness is meaning, in which what we are doing is bigger than we are. That’s why I stayed at Sierra Club for 25 years, because of the meaning.

(I don’t recall if I included my favorite Seligman anecdote, which he uses to illustrate optimism, but I can’t resist including it now. A child and her mother are driving, and the daughter says, “Mom, where are all the assholes today?” Whereupon her mother answers, “Oh, they’re only out on the road when your father drives.”)

But meaning, I was talking about meaning. That was how I was able to push past my modesty and promote various causes and people. It wasn’t about me.

In my farewell note to my work colleagues, I said a lot of nice things about people I worked with, and I ended with a little blurb about my book and my modesty.

If I were a shameless self-promoter, I would tell you all about my recently published novel, Bones in the Wash, a political thriller + family soap + murder mystery set during the 2008 presidential campaign in New Mexico. And available as a trade paperback and e-book. But I was born and bred in the Midwest, so it’s hard to break out of that modesty-is-best mentality.

Oh, did I mention you can read the first three chapters at bonesinthewash.com?

That’s one way I’ve managed this self-promotion. By keeping it light. By mocking myself a bit.

Oh, did I also say that I’m a skilled and experienced writer + editor + designer + strategist, occasionally brilliant and always reliable?

I welcome your ideas on self-promotion.

Bones in the Wash

Will Ask for Directions When Lost